Everyone has a different walk of life and everyone is here for the same reason – to be a better parent. We can all share stories and learn from each other.” – Mark Contrado Jr., Parenting Journey Graduate

“If you have to put your pride aside for your kid, that’s not making you a sucker – that’s making you a good parent,” explains 24-year old Boston native, Mark Contrado Jr. “I would do anything for my son and I live by that.” This realization, along with an endless reserve of perseverance, is what drove Contrado to turn his life around, creating a brighter future for himself and his son. 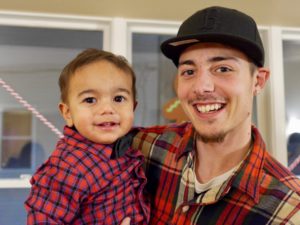 Starting as a teenager and through the age of 22, Contrado describes how he fell into a pattern of drug use and addiction. “I got to a point where I was digging a hole until finally I looked up and realized I had dug a pretty BIG hole,” says Contrado.

When his son, Mark Contrado II, was born and then hospitalized for two and a half months, it hit hard. “Just seeing the pain that the baby was in – I literally felt it inside and it hurt,” recalls Contrado. Due to a number of different factors, it wasn’t before long that the State started reducing visitation rights of both parents, eventually placing Mark Contrado II in transitional care. During this time, Contrado and his son’s mother found themselves without a home, struggling to make ends meet.

Determined to get his son back, Contrado started taking steps to turn his life around. He worked with his caseworker at the Department of Children and Families (DCF) and followed their recommendations – one of which was to enroll in a parenting program. At first Contrado admits that he only went to Parenting Journey because DCF advised him to, but he remained open to the idea – recognizing that it could benefit him in more ways than one. 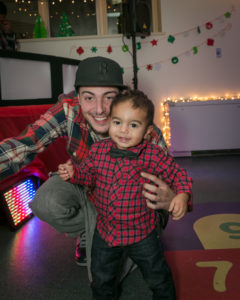 really good group of guys in my group,” he explains while referring to Parenting Journey for Fathers. “The facilitators ran a really good group. I felt like everyone was very close so that you didn’t have to hide anything. Everyone was very honest and forthcoming with themselves and I think it benefited the group as a whole.” Contrado also found inspiration from another father in the group, who had gone through a similar situation as his own and successfully regained custody of his child.

“The group was so good that when it was done and they said they offered a second one, I said, ‘how can I turn that down.’” Having now graduated from Parenting Journey for Fathers and Parenting Journey II, Contrado reflects on what made the experience work for him: “I think the introspective part of it is a big help. A lot of people can’t look inside themselves. It’s a very difficult thing. You have to really look at yourself and when you do, you see what’s working and what is broken. Parenting Journey helps with the ‘what needs to be fixed part.’”

“It gave me a way to set goals for myself,” Contrado continues. “You can dream big, but there are small steps that you need to take to get there and I think Parenting Journey II really helped with that.” During the group program each parent completes an exercise where they create a collage that highlights their goals. “I have that hanging up on the fridge,” explains Contrado. “It reminds me of where I was, and where I am, and where I want to be.”

Contrado has already successfully completed several of the goals he set for himself in Parenting Journey II.  He has a steady job as a carpenter and he has a safe home where his son now resides. He dreams of gaining full-time legal custody of his son and becoming a full-time musician. Contrado’s face lights up as he relays the story of his son’s first steps, which he took during a visit to DCF just three weeks ago. “His health is now good,” Contrado says smiling. “He’s come a long way.”

When asked what advice he might have for other parents, Contrado says “Perseverance. I use it in everyday life. Don’t quit on anything. Perseverance is everything. Keep your head on straight. Don’t worry about distractions.” Perseverance is the trait that has brought Mark Contrado Jr. to where he is today, and Parenting Journey is grateful to have played a role in his path towards a brighter future for him and his son.